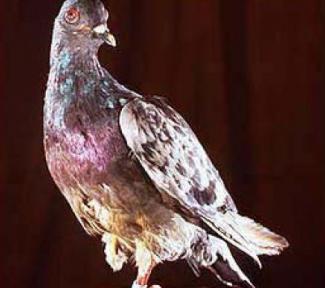 Light a candle for Cher Ami

Give a toy to Cher Ami

Send me notifications about Cher Ami

Cher Ami was a female homing pigeon who had been donated by the pigeon fanciers of Britain for use by the U.S. Army Signal Corps in France during World War I and had been trained by American pigeoneers. She helped save the Lost Battalion of the 77th Division in the Battle of the Argonne, October 1918.

On October 3, 1918, Major Charles White Whittlesey and more than 500 men were trapped in a small depression on the side of the hill behind enemy lines without food or ammunition. They were also beginning to receive friendly fire from allied troops who did not know their location. Surrounded by the Germans, many were killed and wounded in the first day and by the second day, just over 190 men were still alive. Whittlesey dispatched messages by pigeon. The pigeon carrying the first message, "Many wounded. We cannot evacuate." was shot down. A second bird was sent with the message, "Men are suffering. Can support be sent?" That pigeon also was shot down. Only one homing pigeon was left: "Cher Ami". She was dispatched with a note in a canister on her left leg,

We are along the road parallel to 276.4. Our own artillery is dropping a barrage directly on us. For heaven's sake, stop it.

As Cher Ami tried to fly back home, the Germans saw her rising out of the brush and opened fire. For several moments, Cher Ami flew with bullets zipping through the air all around her. Cher Ami was eventually shot down but managed to take flight again. She arrived back at her loft at division headquarters 25 miles to the rear in just 25 minutes, helping to save the lives of the 194 survivors. In this last mission, Cher Ami delivered the message despite having been shot through the breast, blinded in one eye, covered in blood and with a leg hanging only by a tendon.

Cher Ami became the hero of the 77th Infantry Division. Army medics worked long and hard to save her life. They were unable to save her leg, so they carved a small wooden one for her. When she recovered enough to travel, the now one-legged bird was put on a boat to the United States, with General John J. Pershing personally seeing Cher Ami off as she departed France.

Daisy Meadow is a fun place with fun toys to play with. Give a toy in memory of Cher Ami