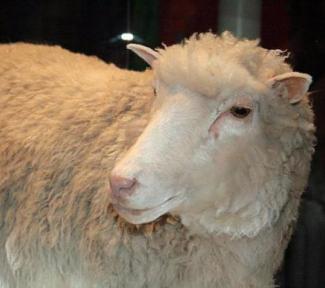 Light a candle for Dolly

Give a toy to Dolly

Send me notifications about Dolly

Dolly was a female domestic sheep, and the first animal to be cloned from an adult somatic cell, using the process of nuclear transfer. She was cloned by Ian Wilmut, Keith Campbell and colleagues at the Roslin Institute, part of the University of Edinburgh, Scotland, and the biotechnology company PPL Therapeutics, based near Edinburgh. The funding for Dolly's cloning was provided by PPL Therapeutics and the Ministry of Agriculture. She was born on 5 July 1996 and died from a progressive lung disease 5 months before her seventh birthday. She has been called "the world's most famous sheep" by sources including BBC News and Scientific American.

The cell used as the donor for the cloning of Dolly was taken from a mammary gland, and the production of a healthy clone therefore proved that a cell taken from a specific part of the body could recreate a whole individual. On Dolly's name, Wilmut stated "Dolly is derived from a mammary gland cell and we couldn't think of a more impressive pair of glands than Dolly Parton's".

Daisy Meadow is a fun place with fun toys to play with. Give a toy in memory of Dolly