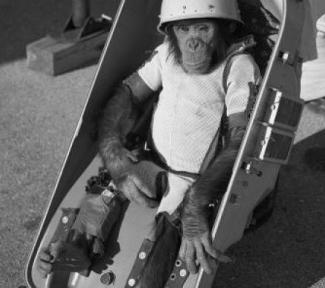 Light a candle for Ham

Give a toy to Ham

Send me notifications about Ham

Ham was born in July 1956 in Cameroon, captured by animal trappers and sent to Rare bird Farm in Miami, Florida. He was purchased by the United States Air Force and brought to Holloman Air Force Base in 1959.

There were originally 40 chimpanzee flight candidates at Holloman. After evaluation the number of candidates was reduced to 18, then to 6, including Ham. Officially, Ham was known as No. 65 before his flight, and only renamed "Ham" upon his successful return to earth. This was reportedly because officials did not want the bad press that would come from the death of a "named" chimpanzee if the mission were a failure. Among his handlers, No.65 had been known as Chop Chop Chang.

Daisy Meadow is a fun place with fun toys to play with. Give a toy in memory of Ham