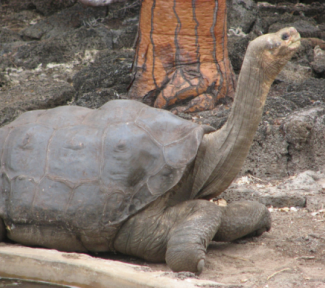 Light a candle for Lonesome George

Give a toy to Lonesome George

Send me notifications about Lonesome George

Lonesome George was a male Pinta Island tortoise (Chelonoidis nigra abingdonii) and the last known individual of the subspecies.In his last years, he was known as the rarest creature in the world. George serves as a potent symbol for conservation efforts in the Galápagos Islands and throughout the world.

George was first seen on the island of Pinta on 1 November 1971 by Hungarian malacologist József Vágvölgyi. The island's vegetation had been devastated by introduced feral goats, and the indigenous abingdonii population had been reduced to a single individual. It is thought that he was named after a character played by American actor George Gobel. Relocated for his safety to the Charles Darwin Research Station on Santa Cruz Island, it was hoped that more Pinta tortoises would be found, either on Pinta or in one of the world’s zoos, similar to the discovery of the Española male in San Diego. George was then penned with two females of a different subspecies. Although eggs were produced, none hatched. Unfortunately, no other Pinta tortoises were found. The Pinta tortoise was pronounced functionally extinct as George was in captivity.

Daisy Meadow is a fun place with fun toys to play with. Give a toy in memory of Lonesome George