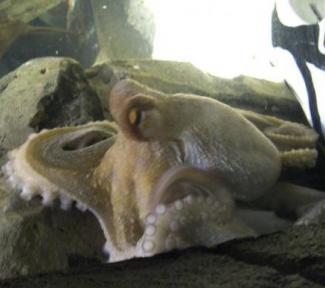 Light a candle for Paul

Give a toy to Paul

Send me notifications about Paul

Paul the Octopus was a common octopus who supposedly predicted the results of association football matches. He made many accurate predictions in the 2010 World Cup which brought him worldwide attention as an animal oracle.

During divinations, Paul's keepers would present him with two boxes containing food. Each box was identical except for the fact that they were decorated with the different team flags of the competitors of an upcoming football match. Whichever box Paul ate from first would be considered his prediction for which team would win the match.

His keepers at the Sea Life Centre in Oberhausen, Germany, mainly tasked him with predicting the outcomes of international matches in which the German national football team was playing. Paul correctly chose the winning team in several of Germany's six Euro 2008 matches, and all seven of their matches in the 2010 World Cup—including Germany's third place play-off win over Uruguay on 10 July. Following these predictions, his success rate rose to 85 percent, with an overall record of 11 out of 13 correct predictions.

Aside from his predictions involving Germany, Paul also foretold Spain's win against the Netherlands in the 2010 World Cup Final by eating a mussel from the box with the Spanish flag on it.

Experts have proposed several scientific theories to explain Paul's seemingly prescient behaviour, ranging from pure luck to the possibility he was attracted to the appearance or smell of one box over another.

Daisy Meadow is a fun place with fun toys to play with. Give a toy in memory of Paul