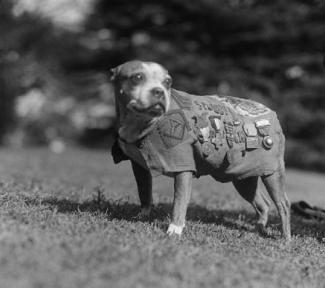 Light a candle for Sergeant Stubby

Give a toy to Sergeant Stubby

Send me notifications about Sergeant Stubby

Sergeant Stubby, has been called the most decorated war dog of World War I and the only dog to be nominated for rank and then promoted to sergeant through combat, a claim for which there is no official documentary evidence, but is recognized in connection with an exhibition at the Smithsonian Institution. He was the official mascot of the 102nd Infantry, assigned to the 26th (Yankee) Division. Stubby served for 18 months and participated in seventeen battles on the Western Front. He saved his regiment from surprise mustard gas attacks, found and comforted the wounded, and once caught a German soldier by the seat of his pants, holding him there until American soldiers found him. Back home his exploits were front page news of every major newspaper.

Daisy Meadow is a fun place with fun toys to play with. Give a toy in memory of Sergeant Stubby