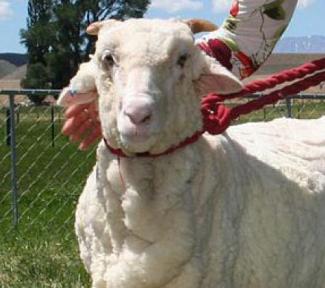 Light a candle for Shrek

Give a toy to Shrek

Send me notifications about Shrek

Shrek was a Merino wether (castrated male sheep) belonging to Bendigo Station, a sheep station near Tarras, New Zealand, who gained international fame in 2004, after he avoided being caught and shorn for six years. Merinos are normally shorn annually, but Shrek apparently hid in caves, avoiding muster. He was named after the fictional character in books and films of the same name.

After being caught on 15 April 2004, the wether was shorn by a professional in 20 minutes on 28 April. The shearing was broadcast on national television in New Zealand. His fleece contained enough wool to make 20 large men's suits, weighing 27 kg (60 lb) — an average Merino fleece weighs around 4.5 kg (9.9 lb), with exceptional weights up to around 15 kg (33 lb).

Shrek became a national icon. He was taken to parliament to meet the then–New Zealand Prime Minister, Helen Clark, in May 2004, to celebrate his tenth birthday In November 2006, 30 months after his initial shearing. Shrek was shorn again, on an iceberg floating off the coast of Dunedin, New Zealand.

Shrek was euthanised on 6 June 2011 on the request of his owner after the animal had entered a convalescent state for three weeks. While treatment was available, it was cost intensive, and as such obviated. He was 16.

Daisy Meadow is a fun place with fun toys to play with. Give a toy in memory of Shrek